• Banwell Architects of Quechee, Vermont and Lebanon, New Hampshire has learned its hockey rink project at the New Hampton School was featured in Metal Building Magazine. The firm’s design for Jacobson Arena at the New Hampton School in New Hampton, New Hampshire was driven by its program, the architectural language of other buildings on the campus, budget and future use.
As late as 2014, hockey teams at the school practiced in an outdoor facility that exposed audiences and players to the weather. The school district hired Banwell Architects to design a new, fully-enclosed hockey rink 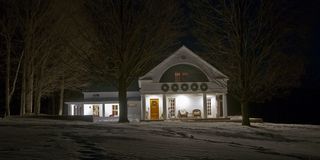